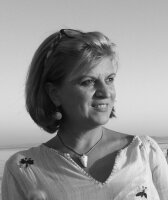 Eda Derhemi completed her undergraduate studies in Linguistics and Literature at the University of Tirana, Albania, where she then taught for five years. After living and working for some years in Italy, including working as a correspondent for Deutsche Welle, she came to the US to enter graduate studies at Illinois (UIUC) where she received a Master's degree in Linguistics and a Ph.D. in Communications. In 2001, while finalizing her doctorate at Illinois, she completed an internship working on indigenous languages and cultures of the world at the Office of Management of Social Transformation at UNESCO in Paris. In 2007 she conducted a year of Postdoc Research in Albania and Kosovo, with an Award from IREX for work on the linguistic representation of ethnic conflict in Kosovar Media. In 2014 she was awarded a grant as a Fulbright Scholar for research and teaching in Albania on language and propaganda. She has extensive teaching, field-work and research experience in various countries and universities lecturing in linguistics, Italian and Albanian language, and communications. In the recent years she has taught courses with a focus on sociological and sociolinguistic aspects of “Linguistic Endangerment”, “Language and Minorities in Europe”, “Languages and Cultures of the Mediterranean” and “Linguistic and Sociolinguistic Changes in the Balkans". She regularly writes cultural and political opinion pieces for the main Albanian media.

In her free time, she enjoys writing essays, short stories and poetry, translating, gardening, running and cooking (she normally runs during cooking, but seldom cooks during running). She loves good films of all times and new films produced in young countries. A heavenly evening for her often includes a good slow-paced film with great photography and a glass of a berrylike chewy red wine. Eda is an indefatigable traveler, and very devoted to her family, her friends, and the many communities she has lived in.

Languages of Focus in my Teaching and Research: Italian, Albanian, Arbëresh, Arvanitika

Eda Derhemi has presented her research in over 30 international conferences all over the world. Her work on linguistic endangerment, minorities and diaspora communities, post-socialist migration, extensive analyses on Arbëresh (in Italy) and Arvanitika (in Greece), and on linguistic representation in the media of ethnic conflict has been published in several academic journals.

Her last article "Arberesh as an endangered language"  was recently published in the Journal Continuum p. 212-225 (https://online.fliphtml5.com/mhxxc/uwut/#p=1).

Two of her book chapters are in press: one is a chapter contracted by Routledge on  the role of structural change in the case of endangered languages based on Arberesh and Arvanitika; the other chapter is "Zeriqi dhe etniciteti emërhumbur i arvanitëve: një ese narrative dhe një trajtesë teorike" (Zeriki and the nameless ethnicity of the arvanitis: a narrative essay and a theoretical examination)

Currently she is also working with Zsuzsanna Fagyal on the e-text for the FRIT 418 course Language and Minorities in Europe.

Her most recent translation (with Francesco Ferrari) is that of the Albanian novel "Mjaltë në teh" (Miele sul coltello) in Italian. October 2020 - Besa Editrice (Italy).

Most of her essays in Albanian are published in the online cultural magazine Peizazhe të fjalës -   https://peizazhe.com/

View all publications on Illinois Experts