We remember faculty who have had a great impact on our department and the students they taught.

Our colleague, Larry Schehr, a scholar of international stature in the field of nineteenth- and twentieth-century 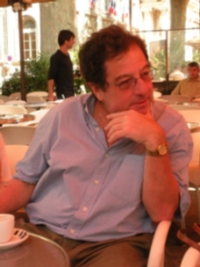 French literature and gay, queer, and gender studies, died June 30, 2011, in Urbana, Illinois. He had been at the University of Illinois, Urbana-Champaign, since 2000. His home department was French but he was affiliated with Comparative and World Literature, Gender and Women's Studies, Jewish Studies, the European Union Center, and the Unit for Theory and Interpretive Criticism. He was awarded the Chevalier de l'Ordre des Palmes Académiques in 2001 by the French government. While at the University of Illinois, he served as Associate Dean for the Humanities in the College of Liberal Arts and Sciences, 2003-2006, directing the Mellon grant program during his tenure.

We miss his intellectual energy and his advocacy of the humanities. For the conference honoring his scholarly achievements, please visit:www.french.illinois.edu/articulations/

Figures of Alterity: French Narrative and Its Others (Stanford U.P., 2003)

Parts of an Andrology: On Representations of Men's Bodies. Stanford: Stanford University Press, 1997.

French Food: On the Table, on the Page, and in French Culture. Co-editor, Allen S. Weiss. New York: Routledge, 2001.

Émile Talbot came to the Department of French at the University of Illinois, Urbana-Champaign in 1967 and taught here until his retirement in 2003, continuing to teach for the campus Honors Program and for the Department until the current academic year. He graduated summa cum laude from St. Francis College of the University of New England in 1963, and earned his doctorate from Brown University in 1968. His areas of specialization ranged from Québec literature, especially poetry and fiction, to nineteenth- and early twentieth-century French literature, especially Stendhal; lyric poetry; the history of aesthetic and critical theory; and French intellectual history.  A true native speaker of French, he read Italian, Spanish, German, Medieval Latin, Portuguese, and Classical Greek.
He published four monographs. The most recent, Reading Nelligan (2002), has been recognized as “a landmark” reflecting “impressive breadth and depth of knowledge in nineteenth-century French poetry” (Québec Studies), an “important ouvrage” revealing “un fin jugement analytique et synthétique” (University of Toronto Quarterly) , "a model of its kind" (Montréal Review of Books). The field of Québec studies was a second scholarly focus that Emile developed after establishing himself as a Stendhal specialist: Stendhal Revisited appeared in 1993, Stendhal and Romantic Esthetics in 1985 and La Critique stendhalienne de Balzac à  Zola in 1979. At his death, Emile had completed about two thirds of a book on Québec poetry of the 1930s.

His scholarly standing brought him invitations to serve as the editor of QuÃ©bec Studies, as a member of the editorial board of Nouvelles Études francophones, Études francophones, La Revue francophone, Nineteenth-Century French Studies, and as The French Review’s editor for creative works. He published numerous articles in such journals as The French Review, Québec Studies, Dalhousie French Studies, the International Journal of Canadian Studies, Studies in Canadian Literature et Études en littérature canadienne, Revue francophone, Nineteenth-Century French Studies, French Forum, Studies in Romanticism, and Stendhal Club.

He is remembered as a generous collaborator by the professional societies to which he belonged, particularly the American Council for Québec Studies (ACQS), of which he was Vice-President, President, and Past President, and the Conseil International d’Études Francophones, on whose Executive Committee he served. For his contributions to the development of the field of Québec studies, he received the prestigious Prix du Québec in 2006, an award made by the ACQS executive board in consultation with the Québec government to honor US based non-Canadian scholars for outstanding scholarship and service in the area of Québec studies. The French government made him Chevalier des palmes académiques.

The twenty-three doctoral dissertations that he directed are a monument to the impact of his intellectual interests on students in the Department (please see below). His former students remember him as an inspired, exceptional teacher. At the undergraduate level, he taught  Introduction to Québec literature, Realism and Impressionism in Literature and the Arts, Heroes and Heroines: From Roland to Beckett, The French Intellectual Tradition, Paris: A Social and Cultural History, and Renaissance Humanism. At the graduate level he taught courses in Romanticism, Realism and Naturalism, Studies in Verlaine, Rimbaud and the Symbolists; Stendhal; Baudelaire; Proust; Short Fiction from Nodier to Maupassant; the Contemporary Québec Novel; and Québec Fiction and Poetry since the 1930s.